As the semester comes to an end I have been tasked with showing how I have helped contribute to other people’s learning throughout the semester. In hindsight one of the places I was most active on was Twitter. On Twitter I would typically share different sources that I found helpful for a pre-serves teacher such as myself as well as just participating in chats such as #saskedchat. Here are some screenshots of things I have shared and comments I have made on Twitter: 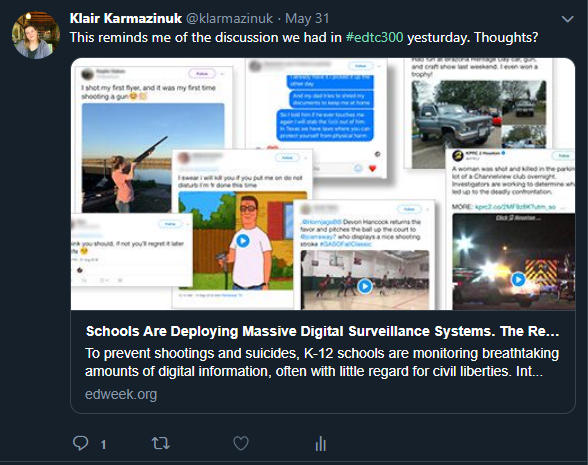 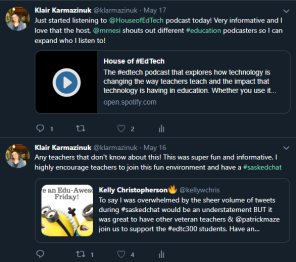 I also was tasked with commenting on other people’s blogs which I could find here.

Something that I didn’t think would happen through my use of WordPress is that I would help people outside of my class learn new things. This happened on my blog post about GrowIt! where the co-founder of the app commented (pictured below) on my blog asking me if I would like to talk to him about trying to incorporate the app into the classroom. I was kind of sceptical about this comment, but after I did some cyber-sleuthing I found out that he actually is the co-founder of the app. While I didn’t think that a tiny blog such as mine would be so noticable by people that I have never even met before, this just shows me that what I do on the internet has a bigger impact than I originally thought.

And lastly, the last place where I was somewhat active was on Slack. I didn’t really know what to comment onto Slack since I was decently active on Twitter with sharing things that I found on Feedly along with my learning project. However, there were a few instances where I answered questions on Slack.

Overall I would typically try to share things with my peers that I felt would help us in our future career as educators. I often found many different sources for ways to bring in EdTech in the classroom. I learned that the education community on Twitter is extremely helpful for learning new things that I otherwise might not have found and I enjoyed sharing new ideas and findings on there as well to contribute to the community’s learning as they have helped contribute to mine.